For those (like me) who need raw GPU power but only possess a laptop and do not want to buy a beefy desktop machine, the solution seems to be an external GPU (eGPU). While Nvidia eGPUs are not supported by macOS at the moment, there are plenty of GPU options from AMD.

In looking for the perfect GPU, I stopped at none other than the AMD Radeon RX Vega 64 which is the high end GPU they offer currently and the 2nd most performant among all GPUs on the consumer market. It is topped only by one Nvidia GPU in terms of TFLOPS performance.

A teraflops (TFLOPS) chip is able to run one trillion floating-point operations per second. TFLOPS is a key performance metric in scientific computing, machine learning and any other areas that need compute-intensive work.

Of course, eGPUs are also accelerating graphics applications and games, lets you connect additional monitors and VR headsets. Keep in mind that eGPUs only work with Thunderbolt 3-equipped Macs running macOS High Sierra 10.13.4 or later. For more informations about compatibility read the Use an external graphics processor with your Mac webpage.

I went ahead and purchased a Razer Core X enclosure because for Vega 64 it is recommended to have a power source of at least 600W and there aren’t many such boxes available. The Sonnet eGFX Breakaway box 650 is lighter but more expensive. Razer Core X is as wide and tall as a 15” Macbook Pro as you can see below: 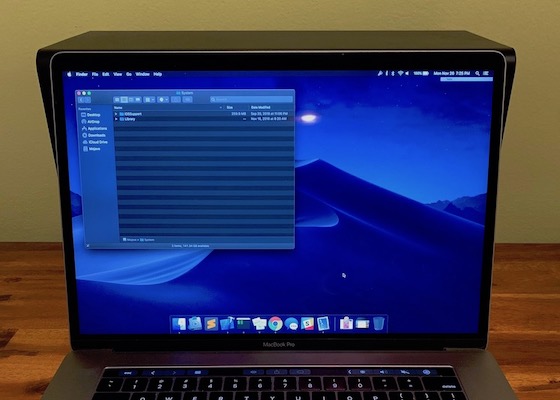 Those 650W are not used entirely by the GPU, by the way. Vega 64 requires only 295W actually. The additional power is available for cases when you overclock your GPU so that it runs even faster, but not only for that - you get to also charge your Mac via the Thunderbolt 3 cable so you do not need the Mac charger anymore while connected to the eGPU. Also, make no mistake, the Vega 64 is almost as wide and heavy as the enclosure - a real monster! 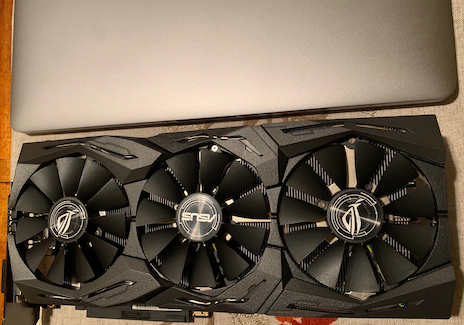 As soon as you connect the eGPU to your Mac via a Thunderbolt 3 cable and power up the enclosure, you will notice the new eGPU icon in the menu bar:

In the Activity Monitor if you open the GPU History view you will see all your GPUs listed - integrated, discrete or external: 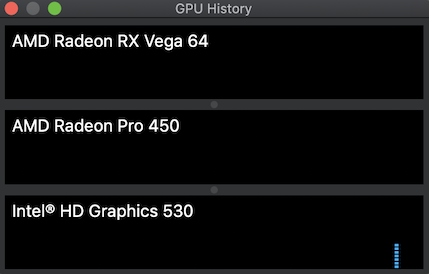 In the System Information app, under Graphics/Displays, you will see all your GPUs listed as well, along with some basic information: 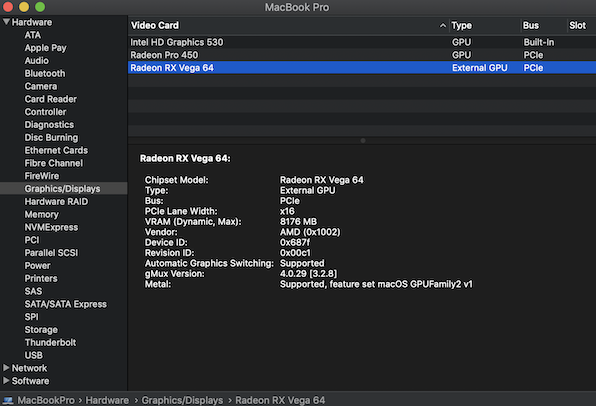 If you right click on a game or application that needs a GPU and click Get Info, you will notice the “Prefer external GPU” option: 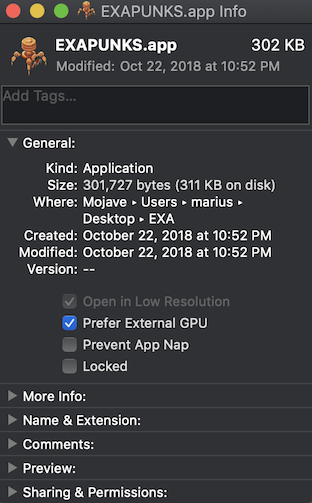 I installed Geekbench 4 so I can run a few benchmarks. The trial version lets you run benchmarks and store results online only and it only lets you run the OpenCL tests. The full version allows for Dropbox integration, saving the results locally and running Metal tests as well. 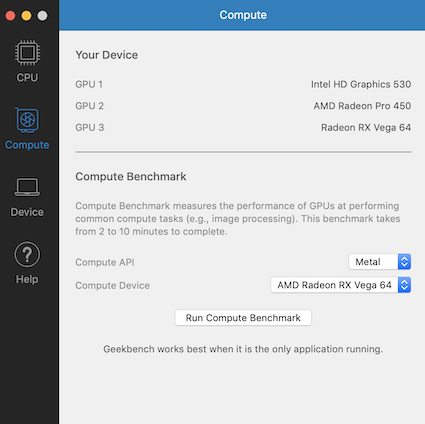 Running a test only takes a minute to complete: 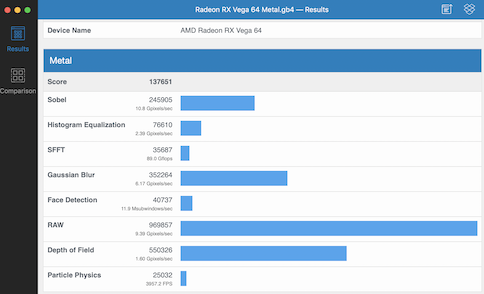 As expected, the biggest score was obtained for a Metal test running on Vega 64. I had the following scores in decreasing order of scores:

The next obvious step is to run some Metal code on these GPUs. Finally! In a playground add this code snippet:

Run the playground and see a similar output:

You can query your devices for many more attributes and features such as memory availability, programmable sample positions support, raster order groups support and so on. For more information, see the MTLDevice webpage.

Apple provides two sample code projects to help you with GPU management in both rendering and compute pipelines:

There are also a few webpages with useful information about resource storage modes, about managing multiple displays and GPUs, about GPU bandwidth, about adding/removing external GPUs, and so on: