Metal 2.2 was announced last week at WWDC 2019. Apple presented it along with relevant numbers:

Note: To get 56 TFLOPS, you need the new Mac Pro with dual Vega II Duo (4 GPUs). The Radeon Pro Vega II Duo is the world’s most powerful GPU at the moment, capable of 28.3 TFLOPs of FP32 precision. This GPU is only available to the Mac Pro currently and it uses the Infinity Fabric Link to boost internal transfers between the dual GPUs to 48 GB/sec.

The Metal Shading Language is now at version 2.2 while the API is at version 3. There is now a way to check the Metal version in Xcode 11 by querying a MTLSoftwareVersion enum, a device property:

Alright, let’s see some of the major additions to the Metal framework this year.

Most of the frameworks are now Metal accelerated: UIKit, SpriteKit, SceneKit, Core Animation, Core Image, MapKit and so on. The simulator works with A8 GPUs and later. You can even run two simulators simultaneously on two different targets: 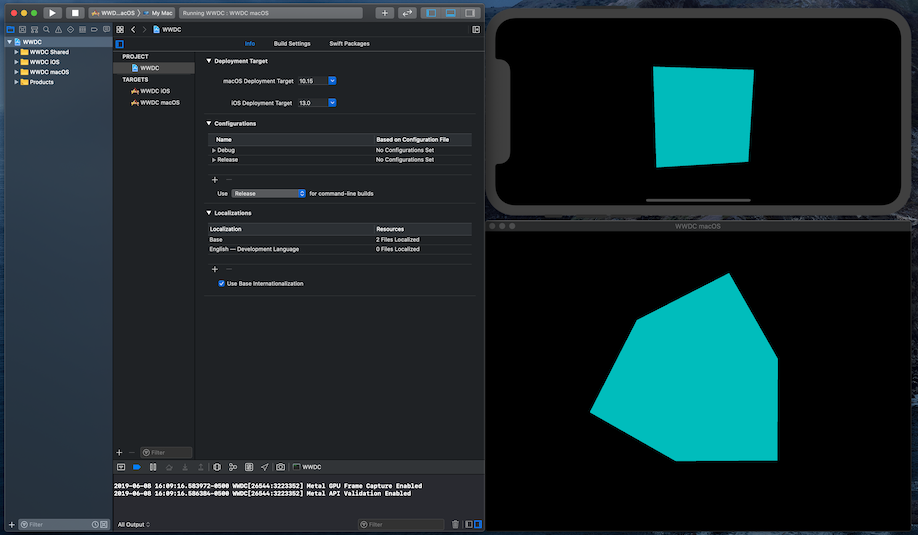 The iOS Metal commands are translated to macOS Metal so you can benefit from the Mac underlying GPU hardware. From the simulator menu you can choose which macOS GPU to use:

The performance in the simulator is still below that of a real device, so production code should be profiled and optimized on the device ultimately. Another thing to remember when using simulators is that the texture storage on the simulator needs to always be in private mode. It is easy, however, to cover both cases. When the texture is on the simulator, create a temporary shared buffer, initialize the texture to that buffer and then blit it to the private texture:

The new Metal Feature Set Tables document was also updated to version 3 and it replaced the old support for feature sets with support for the new GPU families, as following:

To determine if Mac 2 family features are available:

Here are some of the most common techniques and their family support:

Last year when the Metal Performance Shaders (MPS) APIs for Ray Tracing were introduced, the calculation of ray-triangle intersections was moved on to the GPU, making Ray Tracing in Metal really appealing for the first time. This year, two other costly and important stages were moved on to the GPU as well: the acceleration structure and the image denoising.

The Acceleration Structure is updated through a process called refitting which does not rebuild the acceleration structure from scratch but rather moves the bounding boxes to where the geometry moved, thus saving precious processing time. Refitting is now done entirely on the GPU:

The Image Denoising is cleverly aided by an image processing based denoising filter. The idea behind it is to store normals and depth information each frame, and then compare them with the next frame to see if certain pixels got invalidated. This could happen if the object moved to a different location or if another object occluded it.

The new MPSSVGF classes are implementing the Spatiotemporal Variance-Guided Filtering denoising algorithm. Denoising is now up to 1000x faster on GPU than it would take on the CPU.

Metal introduced Indirect Compute Buffers (ICB) last year as a way to reduce CPU overhead and simplify command execution by reusing commands. But it only worked with rendering. This year MTLIndirectComputeCommand joins MTLIndirectRenderCommand as encoding types on the ICB.

The GPU frame capture tool now has a Metal Memory Viewer which lets you inspect textures, buffers and heaps. The tool provides detailed information about the storage mode, type and size: 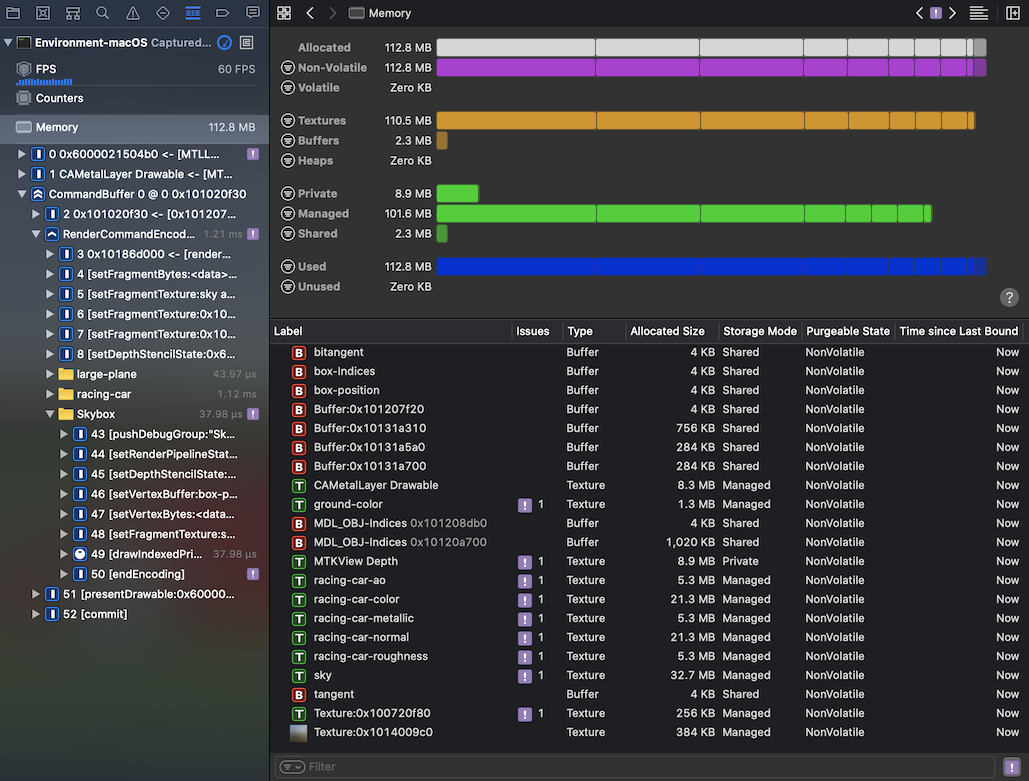 As for profiling, the Instruments tool now has the Metal Resource Allocations instrument which lets you inspect the storage location as well and provides information about resource utilization and state on each device, display or the shader compiler:

New to iOS and tvOS:

Many other new features: